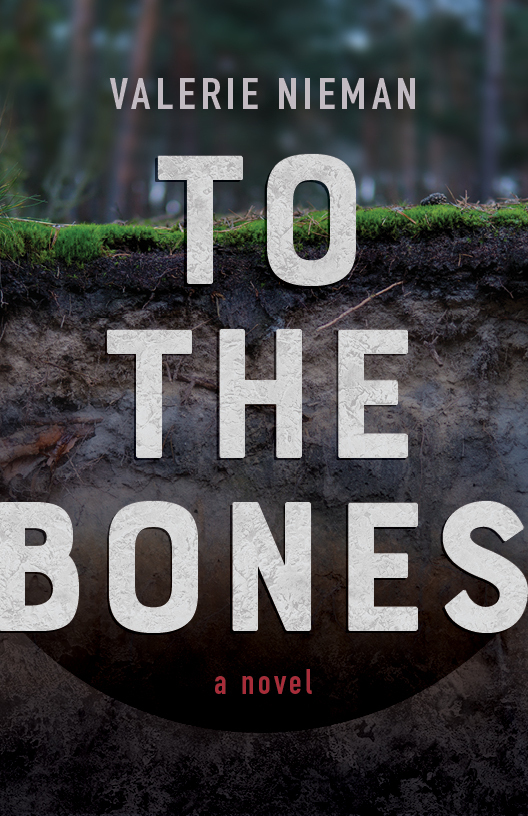 Valerie Nieman, author of To the Bones
(and other AMAZING books!)

To the Bones is an Appalahian eco-justice zombie love story.

Or a small-town paranormal mystery laced with dark humor.

Anyway—my latest novel is a genre collision that begins when a traveler wakes up in a pit full of bones and develops into four mysteries entwined around a coal-baron family in West Virginia.

Darrick MacBrehon, orphan child become government auditor, gets off the highway and is ambushed at a sketchy convenience store. When he makes his way toward town, his bloodied head and staggering walk get him labeled as a zombie, but that’s only the half of it. Something happened down in that mine crack, something that unleashed latent powers. Darrick’s horrific and deadly talent comes just in time for him to team up with locals including Lourana Taylor (on a quest for her missing daughter) to take on the Kavanaugh family and their legendary ability to “strip a man to the bones.”

Mystery, horror, Appalachian tall tale, fantasy, environmental literature, romance, science fiction—even the classic western—can all be perceived in To the Bones. That’s a whole lot of horses to keep running in a more-or-less straight line.

Now, this isn’t my first venture into cross-genre work. My first novel, Neena Gathering, was a post-apocalyptic Appalachian love story modeled on a classic fairy tale. Other works, both prose and poetry, likewise have failed to color inside the lines, but none took in quite so many elements as To the Bones. So I knew very quickly, as these elements assembled, that I would have to be intentional about how I wrote the novel.

While I generally begin with character plus situation and let the story unfold organically, I feared I’d have a real tangle if I decided to “go with the flow.” One approach to handling a cross-genre work, the one I chose, is to follow a standard structure, the classic master story arc or “beat sheet” employed in movies and TV shows as well as bestselling novels. Events unfold at a regular pace, like a familiar chair you sink into. By hitting the “beats,” I could allow the tale to take in many disparate elements—even more than I’d envisioned when I started!

I also followed one of the oldest of story tropes: The stranger comes to town. A recurring theme in Westerns—think of “Shane” and those Clint Eastwood films—it represents what John Gardner called one of the two great stories. (The other is a person goes on a journey—Peer Gynt, Odysseus, Harry Potter, and the list goes on.) Of course, the two are part of a greater whole—the one who leaves on a journey inevitably becomes the stranger who comes to town.

The great story in all places and times is the Hero’s Journey, or “one myth,” as illuminated by Joseph Campbell. Like the “stranger” trope, it’s been traditionally viewed as a male enterprise. That’s changing, and about time. In To the Bones,

one protagonist is a mild-mannered fellow who stumbles into a deadly struggle for the soul of this mining town, while the other is a divorced local woman who assails the home-grown terror in hopes of finding her daughter.

There are other hazards while working with genre crossovers, including the inevitable stereotypes and cliches. You must be aware of them so that you can embrace and shift the conversation. In To the Bones, I drew on the “Wrong Exit” movies, zombies on the loose, and the trope of the all-powerful cattle/railroad/coal baron. To the Bones puts forward stereotypes only to undercut them, from the idea of outsiders stalked by “hillbillies” to the perception that every West Virginian is a coal miner. As Emily Dickinson reminds us, “Tell the truth, but tell it slant.”

As an Appalachian who’s heard all the jokes, I know that I’m playing with fire, but To the Bones relies on exaggeration — a zombie panic, vampires of a very different sort, and ecological devastation with an uncanny source. Beneath the fantastic elements, however, it’s a story of love and despair, about people who deeply love the land of their birth and rearing, and who clearly see the despoiling and destruction wrought by extractive industries that put food on the table. The damage wrought by centuries of exploitation can’t be addressed in one book or a hundred (check out West Virginia University Press’s amazing titles on this topic) but we can add some nuance to that conversation.

So how did I get started on this particular hybrid?

According to JRR Tolkien, in a letter written to W. H. Auden in 1955, he started crafting The Hobbit in the early 1930s when, on a whim, he wrote “In a hole in the ground there lived a hobbit” on the back of an exam he was grading.

Tolkien had no idea what a hobbit was. However, he just had to explore what this “hobbit” thing could be, why it lived in the ground, what foods it liked, how much hair it had on its feet. Over the next two years, Tolkien worked out the story, creating a tale for children. From that an entire universe sprang.

Writers can’t really tell, sometimes, where the idea began. Stephen King said, “I can tell you about fifty percent of the time where I got the idea. And the rest of it is totally like getting an idea in a dream and I can’t really remember where they came from.”

To the Bones began when I’d been unable to find the thread of a new story. In frustration, I made the comment that, back in West Virginia, if I’d been going to kill someone, then I would have tossed him down a mine crack like the one on my hill farm. My friend challenged me to do just that — and so it began.

From there, like Tolkein, I had a lot of things to discover. Who is this person? Why is he in the pit? Who will be his helpers and adversaries? I did not know, but trusted the story.

While I also write mainstream literary fiction and poetry, I believe fantastic literature in all its forms allows us to hold up a mirror to ourselves. The ways of the uncanny or alien can be contemplated when it’s too difficult to see those same flaws and failings in ourselves, whether that be racism or sexism, greed, violence or fanaticism.

To the Bones is a kind of a love letter to the genres that have thrilled me over the years, from Tennyson’s Arthurian cycle to Poe’s tales of madness, to Lovecraft and Bradbury and Le Guin and Herbert, and films from cult favorites to the classic. “Night of the Living Dead” is in here, but also “Night of the Hunter.” And Appalachia has produced a great body of folk tales and stories of otherworldly events—I think of Ruth Ann Musick’s classic “Tell-Tale Lilac Bush” —a rich vein that’s been tapped by writers from Manly Wade Wellman to Davis Grubb to Sharyn McCrumb.

Remember “Ghostbusters”? I’d suggest that just as in “Ghostbusters,” you can dare to “cross the streams” of literary genres. Great power lies there, if you can maintain a grip on story so that the disparate elements fuse into one lightning bolt of a novel.

A daily selection of the best content published on WordPress, collected for you by humans who love to read.

This WordPress.com site is the bee's knees

The View from Goose Hill

A Second Look at What I Thought I Knew about Life

A blog full of humorous and poignant observations.

Reading a book a week